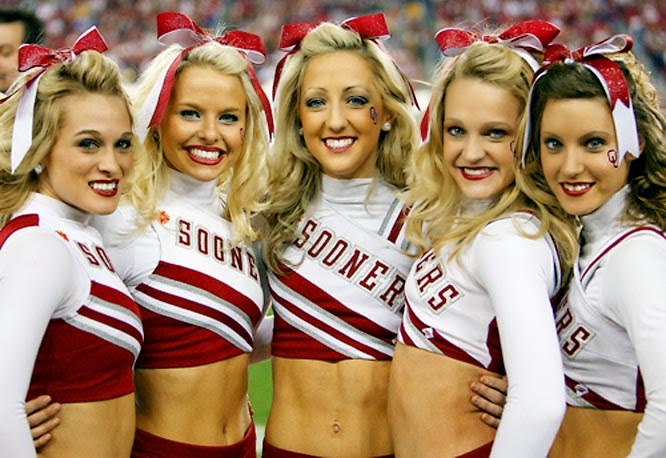 1]   Florida State hosts 22] Clemson; Winston will sit out the 1st half, but Clemson won't be far enough ahead before he comes back... FSU by 7
2]   Oregon is at Washington State; years ago this would be the classic trap game, not this year. Ducks by 40
3]   Alabama hosts Florida; Florida struggled mightily with Kentucky last week and now goes on the road to a very good Bama squad. This used to be the 'it' game in the SEC and I have a feeling it will be intense this year. Going with a huge upset here; Gators by 3
4]   Oklahoma goes to West Virginia; OK got by Tennessee last week with relative ease (UT played a good game though) but they lost their top rusher; how will the OU defense handle the WV offense? Trickett is on fire and they are putting up points like it's the old days. I think it stays tight and high scoring, but OU gets by the Mountaineers by 7
5]   Auburn travels to 20] Kansas State; Thursday night game that will go a long way to determine if KSU is 'back' or not; I don't think they are, Tigers by 14
6]   Texas A&M travels to SMU; Aggies by 31
8]   LSU hosts Mississippi State; both undefeated although MSU hasn't played anyone worth mentioning. LSU's defense is on mid-season form and that will be the difference. Tigers by 8
11] Michigan State hosts Eastern Michigan; Can EMU get 100 yards of offense ... State by 49
13] Georgia hosts Troy; Bulldogs by 41
14] South Carolina at Vandy; this isn't last years Vanderbilt; SC by 37
18] Missouri hosts woeful Indiana; Mizzou by 31
19] Wisconsin with another cupcake hosting Bowling Green; Badgers by 33
21] BYU hosts giant-killers Virginia (and that D); BYU is poised to run the table, this will be the best defense they will play and I think it will show; UVA in a 2nd straight upset; Cavs by 4
24] Nebraska hosts Miami(FL); days gone by this would be HUGE, as it is it's still big; Miami has a ton of future pro-stars and Nebraska has a running game that won't quit (just like in yesteryear) ; Nebraska holds on by 8


Arkansas hosts Northern Illinois; the Razorbacks got the run game going in a big way last week in the upset of Texas Tech; they keep it going this week in the big win: Ark by 29
at 2:36 PM