Everyone Blog About Kimberlin Day

I admit I was close to tears when I saw this:

That is at Lee Stranahan’s blog, where he announces his idea to get everyone to blog about Brett Kimberlin, on Friday, May 25, 2012.

I don't know much about the Brett Kimberlin (Speedway Bomber circa 1981) but what I've read on the 'net the past weeks, but I wanted to put something up today.

Sorry I can't do more Aaron :) {Please, everyone go to Aaron's site and read what's been going on; and follow the links to the other sites, should be thousands today}
at 9:48 AM 1 comment:

Email ThisBlogThis!Share to TwitterShare to FacebookShare to Pinterest
Labels: terrorists

In the News Today

We have all been there... you are sitting there, trying to catch up on the news and you end up just shaking your head. Today has been that day for me. Not only is today National Pack Rat Day but they have announced Skechers is in hot water with the FTC  (Federal Trade Commission). The FTC says Skechers made false claims and promises in their ads, when stating their products aide in weight loss, tone legs and shape your rear. The most notable ads show Kim Kardashian wearing her shape-ups out walking. While some research has even shown people gained weight while using the shoes, others saw no results and actually did less walking because of the discomfort from wearing the shoes. Another area that has Skechers in trouble is their touted scientific studies that have no backing, a chiropractor that supposedly conducted studies was actually a spouse to one of the corporations employees.
Although Skechers still maintains their Shape-ups and other toning shoes produce results, they have reportedly settled for $40 million. When I first heard this I thought that should teach them! Until I learned they earned billions on the products... shaking my head.

My Love of Vampires and Books 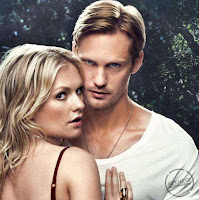 Okay so my life was pretty much normal, well normal for me, until a little over two years ago when a friend introduced me to an HBO series called True Blood.

Now mind you, during this time another vampire series was very popular but I could not stand nor understand all the hype, but something about the characters and the fact that the show is based around Louisiana, an area I am truly in love with too, sparked a great obsession.

I recall the first time watching an episode of True Blood, they were replaying the previous season drawing excitement for the upcoming season. I couldn't help but fall in love with the story lines. Mixed with humor, fabulous looking sex symbols, and a little drama, I became intrigued. I would stay up for hours devouring every episode from the very beginning, thanks to my sweet boyfriend for giving me the idea to hook my laptop up to my TV. I had found a website that had all the previous episodes and I was set.

As season 3 started, I was frantically searching for each new episode online until flipping through the channels one evening I discovered my boyfriend had HBO! Eureka! So from that moment on Tivo was set to ensure I didn't miss a single moment of those sexy vampires from Bon Temps.

Email ThisBlogThis!Share to TwitterShare to FacebookShare to Pinterest
Labels: life


George Lindsey, who spent nearly 30 years as the grinning Goober on "The Andy Griffith Show" and "Hee Haw," has died. He was 83.
A press release from Marshall-Donnelly-Combs Funeral Home in Nashville said Lindsay died early Sunday morning after a brief illness. Funeral arrangements were still being made.
Lindsey was the beanie-wearing Goober on "The Andy Griffith Show" from 1964 to 1968 and its successor, "Mayberry RFD," from 1968 to 1971. He played the same jovial character -- a service station attendant -- on "Hee Haw" from 1971 until it went out of production in 1993.

Lindsey was from Alabama and gave a lot back to Alabama, he will be missed.
at 2:18 PM 1 comment: