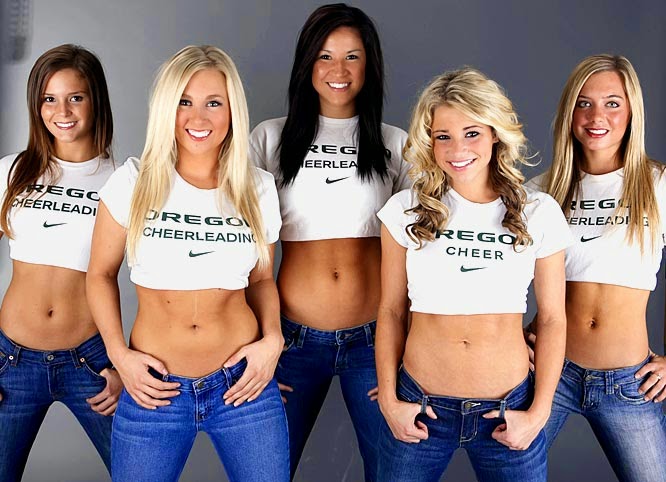 2]   Oregon hosts Wyoming, Ducks by 53
3]   Alabama hosts Southern Miss, classic mismatch. The Ala defense getting on track and they are finally settling on a starting QB (Simms). Expect Alabama to have this over at the half. UA by 41
4]   Oklahoma hosts Tennessee. I expect UT to make a great game of this. They are young and fast but Oklahoma has so many weapons that I just don't the the Vols will be able to get over the hump. They'll keep it close until the end, but garbage time will get the Sooners the win by 15
6]   Georgia is at 24] South Carolina. The bulldogs have problems in this stadium and they should expect this to be a very messy affair. SC will play much better than they did against Texas A&M to start the season, but Georgia has had a week off to prepare. UGA gets it done on the ground late and takes it by 7
7]   Texas A&M hosts Rice. A&M going to get fat eating all these creampuffs ... Aggies by 49
8]   Baylor travels to Buffalo (O.o); won't matter, Petty is starting and Buffalo has no chance. Bears by 61
9]   USC (off that very close win at Stanford) travels to Boston College. BC is tough at home but that won't last long, they don't have the athletes to hang with the Trojans. USC by 22
10] LSU hosts Louisiana-Monroe. Tigers by 48
11] Notre Dame hosts Purdue.  The Fighting Irish destroyed Michigan last week, Purdue was man-handled by a nobody. Look for Golsen to keep his Heisman chances alive with a ND 40 point win
12] UCLA heads to Texas. Should be a good game, Texas got destroyed by BYU (again) last week and UCLA has had problems with everyone. Texas is at home and this is basically a 'must-win' for Coach Strong. I'm going with the upset here and the Longhorns by 4
14] Ole Miss hosts Louisiana-Lafayette; Rebels by 34
15] Stanford hosts Army; this is a dangerous game for the Cardinal. Stanford lost a heart-breaker to USC last week and now have to deal with the running game that is Army. This stays close early, but Stanford will pull away late for a 18 point win
16] Arizona State at Colorado; ASU by 22
17] Virginia Tech hosts East Carolina; classic 'trap-game' after the big win over Ohio State last week. Expect VT to look out-of-sorts early but get it together later. VT takes it by 18
20] Missouri hosts UCF; Tigers by 17
21] Louisville at Virginia; Hot offense versus stout defense. Virginia should have beat UCLA at home and didn't, can they overcome the mistakes (3 turnovers for TD's) that killed them in that game? Louisville's offense is on fire but can be stopped. Upset Special, Virginia by 3
22] Ohio State hosts Kent State; the Buckeyes lost at home last week to VT (first time for Meyer) and will take out all the frustrations (7 sacks allowed, 3 turnovers) on KS. Buckeyes by 41
25] BYU hosts Houston; BYU is on fire and a trendy pick to go undefeated. Houston used to be good but not so much now; Cougars by 31

Vanderbilt hosts UMass; Vandy looks like the old 'Dores and that's not a good thing. Luckily enough, UMass is worse. Vandy by 1
Arkansas travels to Texas Tech; the Razorbacks looked good for a half against Auburn but the offense fizzled in the 2nd; expect them to be able to run on TT early and often. Upset by Ark (5)
Mississippi State travels to South Alabama (love that campus); this is the 1st time an SEC school has went to USA for a game, it will also be the 1st win for an SEC school at USA :)  State by 30
Undefeated Kentucky! travels to the swamp to take on Florida. Stoops has done a great job at UK so far, but he's not there yet. Gators easily by 27 (for the 28th straight win in the series)