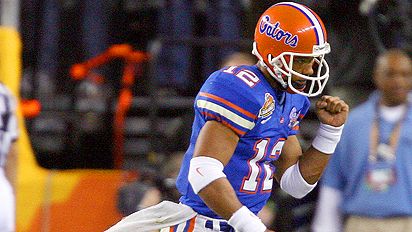 (Jason Parkhurst/US PRESSWIRE)
Chris Leak was nearly perfect early as the Gators built their lead.
Gate-R Done
Ohio State started the night off with a bang but it was Florida which fired off the most rounds. The Gators routed the Buckeyes 41-14, claiming the BCS title. Box Score

This game was never close. OSU looked like Notre Dame did against LSU in the Sugar. Troy Smith was on the run for the whole night (he ended with 35 passing yards and -25 rushing yards I think) and the OSU offense looked like it had taken 2 years off, instead of simply 51 days.

Florida's offense, led by Chris Leak (with assists by Tim Teabow) was unstoppable for most of the night. When the Buckeyes managed to stop Leak and Co. the Gator defense put a stop to any hopes of a comeback.

From the openening kickoff you could see that this game would be high scoring, with lots of big plays. Yet, after that stunning start, Ohio State folded up and went home early. The lack of overall team effort reflects badly on coaching and preperation. Possibly they watched too much ESPN and read too many papers that had them winnning easily and going 'wire-to-wire' to win it all for Tressell's second title in this century.