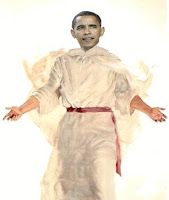 Barak Obama won the Nobel Peace Prize... further proof that it is indeed a political prize instead of actually honoring peace.

The only peace he has brokered in the world was during the 'beer summit' and we're not actually sure how much of a war that was before he stepped in.

The man who has accomplished nothing has now won an award that means nothing.

Edit: New info from JWF tells me that the nomination for the Nobel is February 1... so the O can't even claim the beer summit in his list of 'peace' accomplishments.

The man who has accomplished nothing has now won an award that means nothing.

Think you've summed it up there.