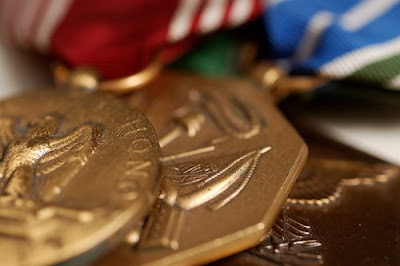 The 11th minute of the 11th hour of the 11th day of the 11th month, Imperial Germany gave up the ghost. America's 1st regime change in the new century. Armistice Day for the War to End all Wars, entirely achieved by the addition of the Great Satan's spiritual fore fathers to an entente of desperate states.

Conscripting an army of free men, America deployed 2 million troops to save Europe from a Prussian military machine that was the world's best - until they hooked up with the Great Satan in combat. Places like Chateau-Thierry and Bellau Wood decisively crushed Teutonicism. Deutschland screamed "GOD! PLEASE! STOP!"

Americans should go down on their knees and thank God Almighty for raising up this laughing race of freemen.

An excellent example of the concept of service to something larger than self became a personal epiphany 2 years ago, at an especial place and a chance meeting with an ancient Iwo Jima survivor.

17 yo, still on the farm when the horrible news came that the neighbor boy had just been killed in Italy. Staring sacrifice in the face, this living embodiment of American Exceptionalism had to take his homie's "... place in the line..." Ma and Pa agreed and the preacher drove him to Nashville to enlist. Less than a year later, this Marine fought in place in the line at the hallowed bloodsoaked Iwo Jima.

His name is legion, for there are thousands like him. From Bunker Hill to Chickamauga, from Midway to Fallujah.

America and the world can never thank ya'll enough.

Pic - "Thank You All" by ScOtT dUnGaN