As good as the UT defense was this year; I have a feeling it will only get better. 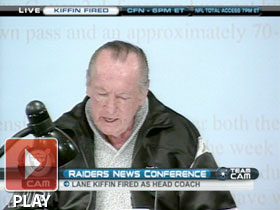 Al Davis reads the letter he sent to Lane Kiffin.

Tennessee has reached an agreement with Lane Kiffin to take over as the Volunteers' next coach, with an announcement planned for Monday, barring any snags, according to multiple sources.

Sources confirm to ESPN that his 68-year-old father plans to join his son after the Bucs' season.

Kiffin once introduced a more aggressive national recruiting plan to USC and he recruited ex-Vols great Peyton Manning, who was consulted by his alma mater and signed off on Tennessee's hiring of Kiffin, sources told ESPN.