Updates on the news I'm reading out there

First Daughter Barbara Bush had her purse and cell phone stolen as she had dinner in a restaurant in Buenos Aires, Argentina, even though she was being guarded by a detail of Secret Service agents, according to law enforcement reports made available to ABC News.

It was not the only mishap on the two-week trip to Argentina by Barbara (right) and her twin sister Jenna (left). (link) 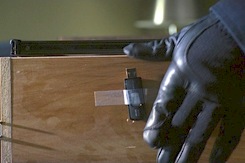 I don't have a TV, but a friend alerts me to an episode of CSI which seems to have been inspired by the Lebanon Fauxtography scandal.

Twin sisters are murdered a few hours apart. Both adopted by different families, they had never met. One was a stay-at-home mom, the other a newspaper editor.

I ‘spect Santa is going to be getting a lot of requests for the new Playstation this year. I heard tell there are folks camping out so they can be at the head of the line when new shipments of this $600.00 bit of conspicuous consumption hits the stores. No one wants their kid to be deprived of one of the necessities of life.

Cassandra at Villainous Company has a fantastic essay answering the question, "What would YOU die for?"

Another useless politician rushes to surrender to Iran.

IRAQ: "So far this month, the civilian casualty count is well below the casualty count in October and below the six-month average. The security force casualties reduced 21 percent over the past four weeks, and are at the lowest level in 25 weeks, he said."

BBC Ties Self in Knots to Avoid Noticing Hizballah Crimes

Here’s a priceless quote from the BBC, whose editors did not realize that two adjacent sentences in this article contradict each other: Israel to probe cluster bomb use.

As well as highlighting the issue of cluster bombs, Amnesty found that Hezbollah hid Katyusha rockets among civilians and often fired them into Israel from the cover of civilian villages.

But researchers found no evidence that Hezbollah actually used civilians as human shields during the fighting.

There is no Britney sex tape, Federline's lawyer says

After Spears filed for
divorce from the fledgling rapper this month, reports surfaced in the
tabloid press that Federline had in his possession a videotape of the
couple having sex and was considering making it public. (link)
__________