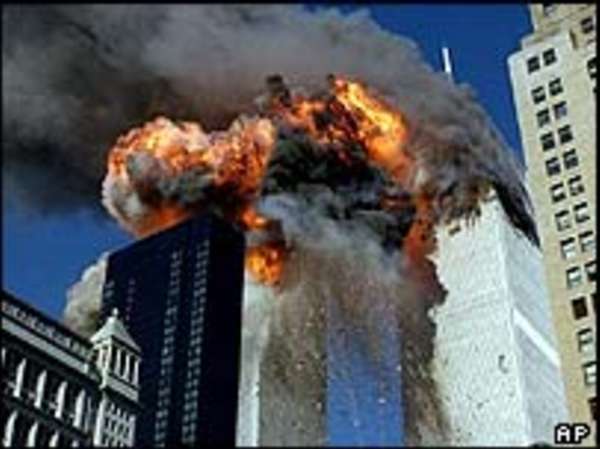 A tribute to a time now dead; when Democrats were anti-Republican, but pro-American. A time when national security was something thrown into a debate simply to highlight a weakness, not something that would make or break a race for office.

A time when my only concerns in life were to my wife and upcoming child (daughter was born in Dec. '01). When muslims were only thought of in passing by most, and not at all by some. A time when the country was still reeling over the difficulties of Floridians in picking a Presidential candidate and the Supreme Court decision that it lead to.

A time when the world was somewhere else and rarely intruded upon the lives of the simple folk of this great land. A time of naive innocence.

All this changed in one brief, yet agonizingly long, morning in September of 2001. On that day, 19 murderers, enemies of the U.S. and all it holds dear, successfully launched an attack on the very heart of the American Dream. On that day, approximately 3,000 citizens were lost in the first major battle in a war that most did not know existed and still will not acknowledge.

No matter what side of the red/blue divide you are on; no matter where you stand in the creation vs. evolution debates; no matter what your view of the Israel/Palestinean conflict is; this day is a day to remember those that were killed in the name of Islam.

This is the day to say to your children that the U.S. will NOT back down; will NOT lightly lose 3,000 of it's precious peoples. On this day, 8 years ago, the country became one like it has only a few times in the history of this great land. That should be remembered ... and mourned.

With so many of our 'great' leaders so quick to make cheap the sacrificies of the nation, the people and specifically the ones who died; take time out to tell your loved ones, your neighbors, your friends, exactly what they mean to you. Treat them with the respect and kindness that you would want to be treated with and NEVER let them forget who the real enemy is.

~Lord Nazh [I'll never forget!] (this caused some controversy the first time, but it is simply a tribute; if you don't like some of my sentiments, don't read them [edited for years])
at 8:21 AM

Email ThisBlogThis!Share to TwitterShare to FacebookShare to Pinterest
Labels: 9-11, tribute

Shan't forget. You're on my blog today.

It's a sad day to remember.

Probably one of the best tribute posts about 9/11 I have ever read.

FWIW I was on my first proper visit to the US when they struck. On a road trip, sampling the American Dream so to speak, from Seattle to SF. The US, the world changed that morning and hasn't felt safe since.

Britain will stand shoulder to shoulder with you regards this war even if others don't fully appreciate the implications.

Thanks Alison, for both the comment and the continuing support